Its history in Italy and the United States underscores an important fact about mozzarella cheese: Although they all share the name “mozzarella,” there are actually several different varieties of the beloved Italian cheese, each with its own unique characteristics. 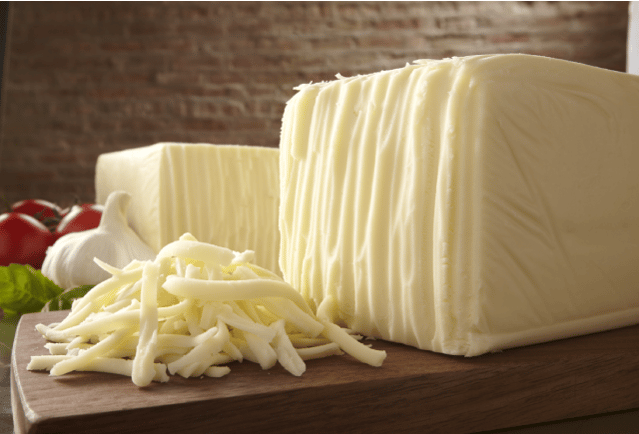 Mozzarella di bufala is the original mozzarella cheese. A soft, fresh mozzarella that’s made from water buffalo’s milk and stored in water, brine or whey to keep it soft, it’s packaged as balls or logs instead of blocks. The most common shapes include large 10-gram orbs, golf ball-size balls known as “bocconcini,” cherry-size pearls known as “ciliegine,” braids called “treccia” and knots known as “nodini.” Because water buffalo’s milk has more protein, fat and calcium than cow’s milk, mozzarella di bufala is creamier in texture than cow’s milk mozzarella and richer, sweeter and tangier—more “natural” tasting—in flavor.

“In the United States, we only have three or four water buffalo herds providing milk to the cheese industry, so it’s a very small segment of the domestic market,” explains Dean Sommer, a cheese and food technologist at the University of Wisconsin–Madison’s Center for Dairy Research. “But we get tremendous amounts of it imported both from Italy and from Colombia, where there still are a lot of water buffalo.”

Stracciatella is made from fresh mozzarella curds that are stretched into long ropes, then shredded into thin pieces that are soaked in cream, which gives Stracciatella a loose, creamy consistency and a flavor that’s rich, sweet and just a little bit sour.

Scamorza is mozzarella that has taken a left turn during the cheesemaking process. Like regular mozzarella, it’s made using either water buffalo’s or cow’s milk from curds that are stretched. With scamorza, however, the curds are smaller so as to retain less moisture. Furthermore, the finished product is pear-shaped and hung by a string for two weeks of aging. The result: a cheese that’s drier and more pungent in flavor than fresh mozzarella but suited to many of the same applications.

Whereas fresh mozzarella is packaged as balls in liquid for near-term consumption, traditional mozzarella (also known as aged, block or processed mozzarella) is packaged dry in blocks—or in cubes, chunks, sticks, slices or shreds that have been cut from blocks—for less immediate consumption. Its shape, packaging and shelf-stability aren’t its only differentiators, however. Unlike fresh mozzarella, traditional mozzarella’s texture is firm instead of soft; its flavor is saltier thanks to added sodium; and its lower moisture content makes it more meltable.

Stretching Out: How Mozzarella Is Made

What the various types of mozzarella have in common is how they’re made. Although there may be some variance across varieties and between cheesemakers, the basic process is the same: Milk is heated to a temperature of 33 to 39 degrees Celsius, after which rennet (i.e., enzymes that thicken milk during the cheesemaking process) and either citric acid or vinegar are added. This “activates” the mixture and causes it to curdle, at which point the solids (or curds) are cut into pieces and separated from the liquid (or whey), the residual of which gradually drains as the curds rest and solidify. Soon thereafter, when they have reached the proper pH level, the rested curds—now a single mass—are further cut into pieces, which are then submerged in hot water until they begin melting. Here, the curds are kneaded and pulled either by hand or by machine until they form a solid mass from which balls are formed, then submerged in cold water to set their shape.

What ultimately makes mozzarella mozzarella is the final stretching and pulling of the curds—a technique known as “pasta filata,” Italian for “spun paste.” Although they utilize different methods for creating curds, fresh and traditional mozzarella utilize the same pasta filata method for stretching them into a final product.

After it’s pulled into shape, fresh mozzarella is packed in liquid for fast consumption, while traditional mozzarella is allowed to dry and harden.

Mozzarella continues to be Americans’ favorite cheese variety. Dig into all aspects of this pasta filata cheese, Saputo’s flagship product, by downloading our Stretching for Success white paper.