Inside the Fine Art of Artisanal Cheesemaking

Long ago, a shepherd riding across the desert with milk stored in a vessel made of an animal stomach, may have discovered cheesemaking. Enzymes from the stomach, along with heat, would have converted the milk into cheese. “I can’t imagine [it] was delicious, and that [illustrates] the central advancement of modern cheesemaking,” says Molly Browne, education manager of Dairy Farmers of Wisconsin. “With state-of-the-art technology, equipment, and environmental controls, today we can create cheese that is both nutritious and tasty.”

Every cheese starts with the same four ingredients: milk, rennet (enzymes), cultures and salt. But as Brad Panarese, marketing director of Saputo Cheese USA Inc. notes, two cheeses made from these ingredients—and even ripened the same way—can end up looking and tasting completely different. It comes down to different types of cheese production—and the cheesemaker’s artistry.

“Saputo has a long tradition of expert cheesemaking in its own right,” Panarese says. “We have also expanded significantly by acquisition, so we have absorbed the traditions of generations of other cheesemakers over the years as well. The result is an ‘art,’ resulting from generations of diverse cheesemakers combined with an understanding of the interrelationship between science and that art.”

Soft cheeses have a high water content. Most cheeses, including the goat cheese (also known as chèvre) often used on salads, are produced with bacterial fermentation, which produces lactic acid. That’s what makes the cheese tart or acidic, so the quality and control of those cultures are critical. “A good chèvre has just a hint of a goat flavor and also a hint of citrus flavor,” says Dean Sommer, cheese technologist at the Center for Dairy Research at the University of Wisconsin–Madison.

There are two types of mozzarella, each made differently. Fresh mozzarella has a high moisture level and is softer. It’s the type so prevalent in Italy. Block mozzarella, the firmer type usually used on pizzas and in sandwiches in the United States, didn’t emerge until the 20th century.

In making ricotta, the cheesemaker adds a direct acid (traditionally vinegar) and heats the curd. Ricotta works well in dishes like lasagna and cheesecake because it doesn’t melt.

Pungent, blue-veined cheeses such as gorgonzola (often eaten uncooked) and blue (frequently used in salad dressing and dips) have blue mold spores added. After pressing the curds into a form, needles are driven through the wheel of cheese so the interior gets oxygen. That lets the blue mold grow throughout the entire body of cheese.

Cheesemakers produce dry, hard Italian cheeses, such as parmesan and romano, by cutting the curds like tiny grains of rice. Then, they heat the curds and whey to drive out more moisture, put the curds in perhaps a 20-pound wheel, and set it in a brine for two to three weeks. It subsequently goes into a drying room to age. Such cheeses are often grated over pasta. 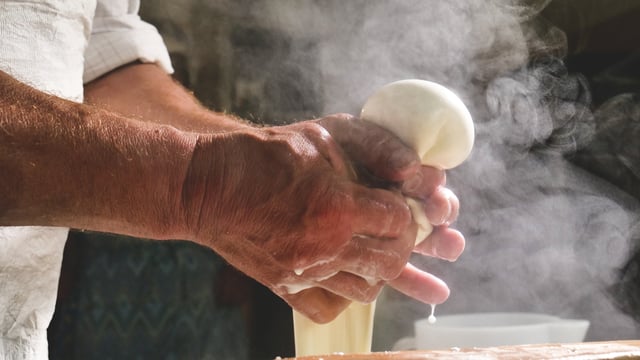 How to Select (and Protect) Cheese

Sommer recommends buyers investigate a cheese manufacturer’s reputation—and visit the manufacturing plant, if possible. “Make sure it’s a nice, clean operation, and that there are knowledgeable cheesemakers there that really understand the cheesemaking process,” he says. “It’s also important to test the cheese periodically, to make sure the flavor, texture [and how it melts] are still what you expect.”

Most cheeses should be stored at about 40 degrees Fahrenheit in a cooler where the temperature doesn’t fluctuate. “If you put a bunch of product in the cooler and [then] the temperature goes up six, eight or even 10 degrees and then slowly drops back down, that’s harmful to cheese quality,” Sommer explains.

It’s also important to protect cheese from light exposure, which damages the product. “There’s already tremendous light degradation of cheese quality at the retail level in the display cases,” he adds.

Blue-vein and white mold cheeses need oxygen for the molds to survive, so they are never vacuum-sealed. To protect their integrity, don’t store such cheeses near onion, garlic and other highly aromatic ingredients.

Generally speaking, the softer the cheese, the shorter its shelf life. “A fresh mozzarella is good for only about 30 days,” Sommer says, “whereas a hard cheese like a parmesan might easily have a shelf life of two years.”

There truly is both art and science behind making great cheese, and knowing a little about the different types of cheese production means better success with selecting cheese and storing it properly after purchase.

Sign up here to stay on top of the latest cheese and foodservice industry trends with Saputo’s new monthly e-newsletter.