More Than Mozzarella: How Operators Are “Plussing Up” Their Pizzas with Cheese Blends

Nine in 10 consumers consider cheese an essential pizza ingredient, and traditionally, one type has ruled the pizza realm. 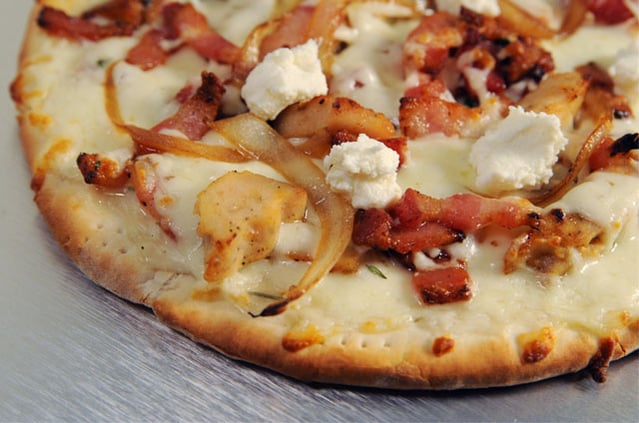 According to Datassential’s Menu Trends database, mozzarella is used most frequently—yet not always exclusively—on pizza. Many operators are mixing the classic cheese choice with two or three other varieties, including some unexpected ones.

“Some operators are starting to accentuate pizza with more pungent cheese to give it an interesting texture or flavor,” explains Datassential’s Kat Shear, a senior analyst. For the most part, operators are sticking to three or four types of cheese in blends for pizzas: specifically, mozzarella, provolone and Parmesan, she says.

The fourth “seems to be a toss-up,” she adds. “It could be cheddar, Pecorino Romano or another sharp cheese.” Romano, which appears on 25.4% of pizza menus, and ricotta (23.7%) are also popular choices for blends, Menu Trends confirms.

Pizza can be a great candidate for different cheese combinations because its basic elements work well with numerous types and toppings, says Chef Emily Ellyn, who has appeared on the Food Network’s “Food Network Star,” “Cupcake Wars” and “Cutthroat Kitchen.”

“Pizza is very malleable—it’s a nice blank canvas,” Ellyn says. “The beauty of low-moisture mozzarella is that it melts beautifully and browns nicely. Add things like a cheese blend that’s salty, nutty and rich, and it just elevates your pizza and enhances the flavors.”

Ellyn loves incorporating soft cheeses like Saputo® Premium Gold Ricotta Cheese on pizza, either before cooking or by adding the cheese closer to the end of the process—similar to how ricotta and Asiago cheese are utilized in the Country Tuscan Pizza shown above.

“Spread it evenly all over the dough and bake it with your toppings,” Ellyn says of working with ricotta. “There’s something very magical about [adding it in] the last five minutes—you just get a nice toasting on top—or using it almost cold, as a finishing sauce.”

In recent years, operators also have turned to savory, piquant pizza topper options like Gorgonzola cheese, which can be incorporated into dishes like this Hearty Potato, Bacon and Gorgonzola Flatbread or Gorgonzola and Steak Flatbread. Blends containing Gorgonzola currently appears on 9% of menus, according to Datassential.

Meanwhile, goat cheese use on pizza has grown 5% in the last four years. It also appears in blends on 3.5% of menus.

Goat cheese is often “paired with other cheeses like mozzarella, which makes sense because it could be overpowering,” Shear says. Other frequently seen combinations include goat cheese with tomato and mushroom or with arugula and artichokes, she adds.

Another option: adding flavored cheeses, such as Montchevre® Garlic & Herb Goat Cheese, to enhance the natural flavors of the pizza’s other ingredients.

If operators are concerned their customers would be more interested in primarily classic pizzas, they may be able to include different, potentially less traditional mozzarella cheese styles instead of mixing in a few completely different kinds of cheese. Some operators have started integrating whole milk mozzarella or smoked mozzarella, for example, “to give a different depth to their pizza,” Shear says.

Asked which foods they’ve grown tired of eating during the pandemic, consumers surveyed by Datassential in August were most likely to point to pizza (it was cited by 28% of respondents). Operators can counter that fatigue by offering fresh takes on the dish.

As social distancing and various shelter-in-place recommendations continue in some areas, Ellyn anticipates that “consumers are going to demand a special experience [when they go out] because they do it less frequently. The restaurant industry has to respond accordingly,” she says.

Dishes with “even better-quality mozzarella and ricotta cheese [will be] on people’s radar,” Ellyn continues. “We, as consumers, don’t want to sit around and have the same old thing. Give us more. If that means a four-cheese blend, call it out. Let me know Pecorino Romano is different from [other] flavors, and let me taste them. It’s this idea of celebrating a different way of consuming [the standard] cheese, marinara and dough creation we’ve enjoyed for years.”

With the diverse palate U.S. consumers bring to the table, pizza could theoretically include any number of elements—ranging from sweet-and-savory toppings like honey, prosciutto and pear to international flavors.

“No one’s saying a pizza has to be Italian,” Ellyn says. “Feta’s “salty crumble” would work beautifully on a Mediterranean-inspired pizza, for example. “Honestly, you can make a good pizza with any combination, she adds. “It’s about being creative and knowing what pairs well.”

Internationally themed pizzas aren’t the only ones that resonate with consumers. Classic regional varieties from cities like Chicago, Detroit and New York have become more popular outside of their respective areas of origin in recent years. For more on local pizza approaches, check out Regional Pizza Rising: How Diverse Styles Are Keeping Pizza Popular.