How to Get Your Goat (Cheese Dishes Right)

Tart, salty, and pleasantly mild, goat cheese is a winning addition in recipes across the culinary spectrum—from appetizers (like these tamales with pulled smoked chicken) to dessert (Fig and balsamic ice cream, anyone?). 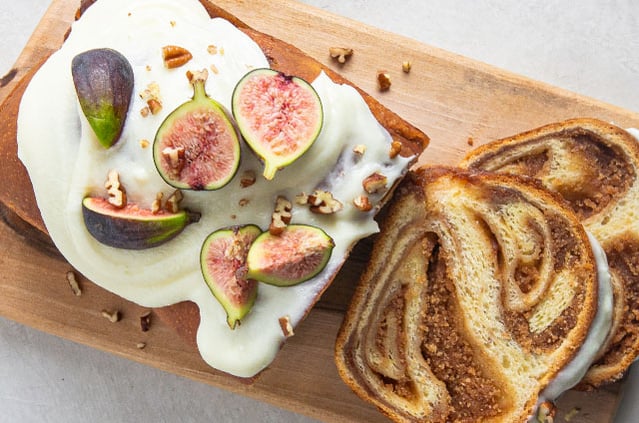 Also known as chèvre (French for goat), goat cheese adds a distinctive tanginess that consumers are craving with increasing regularity. “The growing preference among consumers for healthier alternatives is primarily driving the growth” in the goat cheese segment of the global goat’s milk products market, a June 2020 Research and Markets report found. Indeed, IRI data confirmed a 3% increase in consumer goat cheese sales from 2018 to 2019 alone.

Chefs are capitalizing on this increased consumer demand: nearly a quarter (23.9%) of U.S. restaurant menus now feature dishes in which goat cheese appears—up a notable 61% since 2009, per Datassential MenuTrends. The most likely places to find goat cheese on menus, Datassential reports, is as a crumbly topping on salads (29.5%) and pizza (9.6%) or as a creamy addition to sandwiches (8%) and egg dishes (5.5%).

In honor of National Goat Cheese Month, let’s take a look at how to milk versatile goat cheese for all it’s worth.

As is the case with cheese made from cow’s and sheep’s milk, the process of making goat cheese begins with adding a starter bacteria culture and a powdered rennet (a complex set of enzymes found in the stomach lining of cows and goats) to the milk. The bacteria turns the milk’s lactose into lactic acid and the rennet curdles the milk so that the solid (curds) can be separated from the liquids (whey).

But unlike cow’s milk cheeses, goat cheese is rarely aged for long. Fresh chèvre is typically aged for no more than two days, but other goat cheeses are aged for anywhere from three to 10 weeks, which makes them drier and crumblier but still keeps them semi-soft.

Goat cheese gets its tangy taste and smell from its high amount of fatty acids. It also contains less milk protein, making it softer and creamier—and a perfect choice for bagel spreads, dips, and a zippy addition to pasta sauces.

Where cow’s milk goes, goat’s milk often can follow. Goat’s milk works well to make creamy favorites like Gouda, Camembert and feta cheese. A goat’s milk Brie may be even creamier and more flavorful than one made with cow’s milk. Goat cheese isn’t as stretchy or strong as cow’s milk cheese, however, so it wouldn’t be the best choice to create gooey mozzarella sticks.

Tart goat cheese is interesting enough to stand out, but mild enough that it won’t overpower other ingredients. Here are a few real-world examples of how to add goat cheese to your menu.

Go for the Goat

While goat cheese is a natural for topping pizzas and salads, it plays well with just about anything—from fish and meat to peppery greens, tart fruits, and salty nuts. Here are a few more goat cheese tips to keep in mind:

Although goat cheese doesn’t yet rank among consumers’ most-loved cheese varieties, they continue to warm to it. Its distinct, yet mild, taste makes it ripe for experimentation.

Ready to get cooking with goat cheese? Try these goat cheese-stuffed jalapeno poppers or this goat cheese, olive and roasted pepper sandwich.