Ricotta Cheese: The Whey to Go

It’s easy to overlook ricotta. Mild, fluffy and slightly sweet, the Italian cheese is most closely associated with lasagna, where it’s typically blended with mozzarella and Parmesan. (The same mixture figures prominently in ravioli, manicotti and cannoli as well.) Indeed, for both professional chefs and home cooks, ricotta often plays a supporting (rather than starring) role. 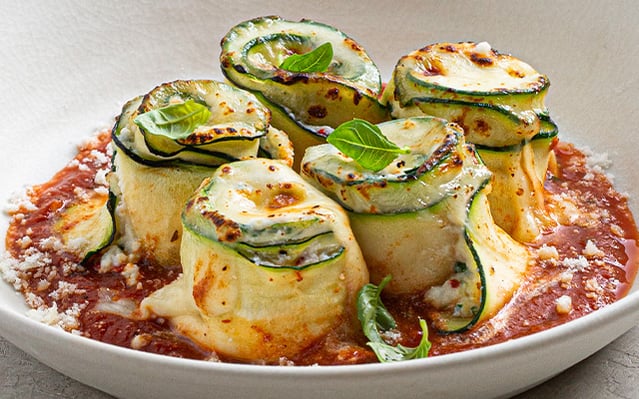 But many chefs are moving beyond ricotta as delicious filler. In the past 10 years, ricotta’s appearance on U.S. restaurant menus has steadily grown to nearly 24% last year. Datassential research also shows that ricotta is most commonly found in pasta dishes (32.7% of all applications) and pizza (32.1%). But it’s also making its way into breakfast, appetizer and dessert dishes, including First Watch’s Mixed Berry Toast, which features a lemon ricotta cream, and Le Pain Quotidien’s Roasted Tomato and Ricotta Toast.

Waste Not, Want Not

So what exactly is ricotta? In short, it’s a fresh (read: unripened) cheese that can be made from the milk of cows, goats, sheep and water buffalo. These days, nearly all ricotta—including Saputo® Premium Gold Ricotta Cheese, Frigo® ​Ricotta Cheese and Stella® Ricotta Cheese—comes from cows.

The word ricotta is actually Italian for “recooked,” because historically, ricotta was made using the whey left over after curds were removed to make hard cheese. (This is why ricotta is considered a whey cheese.) Ricotta is also one of the oldest cheeses we know of: Crafty and resourceful ancient Romans made it—and then passed their habit of letting nothing go to waste to future generations.

Traditionally, small amounts of whole milk and some form of vinegar or citrus juice are added to the whey, which is then heated. Any remaining curds begin to coagulate, growing larger and more solid. Strain it all through a cheesecloth and, voila, you’ve got ricotta. Today, ricotta is generally made directly from whole milk, rather than whey, but the process is similar. It’s one of the easiest Italian cheeses to make, which may be why some chefs produce their own.

It’s important to remember that as a soft unripened cheese—think of it as a creamy curd—ricotta is full of moisture and therefore highly perishable. Classic ricotta is mild in taste, but aged varieties (such as salty ricotta salata), do exist.

Across the Spectrum, from Sweet to Savory

Ricotta’s spreadable texture and mildness are key to its versatility. Ideal for stuffing pasta (ravioli or shells, for example), ricotta is also a mainstay ingredient of many Italian desserts, including cheesecake and cannoli, because it pairs well with sugar, cinnamon, candied fruits and chocolate chips. Ricotta even functions effectively as a sauce thickener because it has less fat than cream. It also generally has lower sodium and fat levels than other cheeses.

More and more chefs are pushing beyond these classic ricotta applications into more adventurous territory, however. Some are flipping the script by using ricotta as a topping, rather than a filling. You can see that approach in Michelin-starred chef Andrea Migliaccio’s passata of tomatoes with ricotta and pesto, and MOD Pizza’s seasonal Lucia pizza, which is topped with ricotta, mozzarella, smoky pepperoni and fresh basil.

Ricotta can also easily anchor a dish in unexpected ways. At her Boston restaurant Stillwater, chef Sarah Wade specializes in comfort food. One offering: ricotta dumplings with marinara sauce, which she describes as “so fluffy and creamy and delicious.” The cheese can also help kick off dinner, as it’s popping up in plenty of creative salads. Cookbook author and chef Sarah Copeland dreamed up this healthy shaved zucchini with ricotta and walnuts salad. And before closing late last year, Los Angeles-based Church & State Bistro offered a farmers market salad with housemade ricotta, (edible) nasturtium leaves, quinoa and toast.

Another pro ricotta tip: use it as a substitute for yogurt, as done in this whipped ricotta bowl with roasted pears. But don’t sweat the fruit too much: ricotta plays nicely with anything that’s in-season.

Broadly appealing without being bland, ricotta can shine across menu dayparts. Here are a few rules of thumb when using it:

Ricotta’s potential extends far beyond the tried and true. Your guests will reward your willingness to experiment, all day, every day.