Restaurateurs have reason to love Valentine’s Day: It’s typically one of the most popular holidays to dine out.

In 2018, reservations for Wednesday, Feb. 14, were 433% higher compared to other Wednesdays in February. Overall restaurant sales were 32% higher, and eateries made 7% more on online orders.

In 2019, Americans planned to spend a whopping $3.5 billion on an evening out with their sweetheart, according to the National Retail Federation. Both men and women said their top choice for a Valentine’s Day gift would be a romantic dinner. 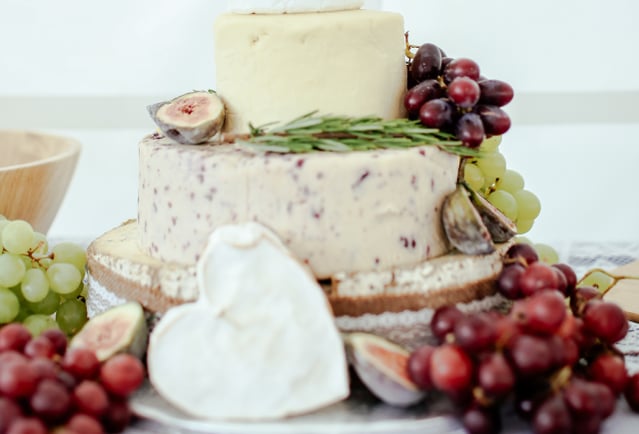 Although competition for couples’ celebratory business can be fierce, offering special dishes made with indulgent ingredients—like high-quality cheeses, which can be incorporated into everything from appetizers to desserts—can help restaurants attract lovestruck customers who are primed to splurge in terms of both calories and cost. In fact, 90% of people who are currently in a romantic relationship feel it’s OK to cheat on their diet on Valentine’s Day, and 49% are willing to shell out for pricier items than they’d normally order.

But offering a binge-worthy menu is only one way to draw eager-to-eat crowds on Valentine’s Day. Here are four more strategies that can help restaurants turn romance into revenue.

Sixty percent of men and women said they’d give their partner an ‘F’ for the amount of effort they typically put into planning Valentine’s Day. Forgoing the traditional fine dining choices—which saw the biggest sales increase of any restaurant segment in 2019—for a more offbeat option might help delinquent dates earn a higher mark.

Waffle House, for example, dons white tablecloths and accepts reservations for Valentine’s Day. White Castle has held a similar event for more than 25 years; in 2019, it accepted reservations online, and served guests mozzarella sticks, smoked cheddar cheese Impossible Sliders, and other savory items tableside at its Feb. 14 and 15 Valentine’s Day dinner event. The burger chain also encouraged diners to post photos on social media with a #LoveCastle hashtag and provided a special Snapchat Geofilter at its locations for the holiday.

Make the Holiday an Event

In 2019, Dunkin Donuts, doubled down on decadence by selling its first-ever donut with two fillings: a brownie batter-seasoned buttercreme and a cookie dough-flavored filling. On top of that, it sponsored a Valentine’s pop-up at a Las Vegas chapel a few days before the holiday. A pink-haired officiant was on hand, and the first 100 couples who stopped by received donut bouquets—whether they were there to get married, renew their vows or just satisfy their sweet tooth.

Cater to the Consciously Uncoupled

People in relationships aren’t the only ones who flock to restaurants on Feb. 14. More parties of three, four, five and six also dine out; in fact, one survey found that 42% of people who were unattached planned to eat at a restaurant on Valentine’s Day, and nearly half (46%) intended to share their experience on social media.

Last year, Potbelly Sandwich Shop offered a free cookie to customers who visited one of its 450 locations without a significant other—to “put a fork in the single-shaming epidemic,” it said.

Meanwhile, patrons who shredded a photo of their ex at any of Hooters’ more than 430 locations could get 10 free boneless wings, served with their choice of blue cheese or other dressings, with the purchase of 10 wings. Customers also could take an online quiz, after which they received a recommendation for how to destroy the image and a digital coupon. More than 40,000 photos of former flames were shredded during the chain’s 2018 promotion, the company said.

Limited time offers featuring holiday-themed menu items—such as Valentine’s Day wine-and-cheese pairings, or the heart-shaped donuts Krispy Kreme has offered, adorned with sayings like “DM ME” and “ALL THE FEELS”—can create a sense of excitement and urgency that fuels demand for a dish.

Some eateries have opted to retool pre-existing menu items instead of debuting new ones. To commemorate Valentine’s Day this year, for example, Chick-fil-A restaurants are packaging 30 chicken nuggets with six chocolate chunk cookies or 10 Chick-n-Minis—nuggets tucked in small yeast rolls brushed with honey butter spread—in a special heart-shaped container. The LTO is available from Jan. 20 through Feb. 29.

Meanwhile, California Pizza Kitchen last year offered customizable e-cards and provided a dine-in $35 prix fixe meal that included an appetizer, two entrées and a dessert. Customers could also have their gouda-topped barbecue chicken, five-cheese or other pizza made with a heart-shaped crust for no additional charge—whether they devoured it in the restaurant or ordered their pie to go.

Prominently featuring numerous varieties of premium cheese in courses can help fulfill diners’ desire to indulge on Valentine’s Day. Whether it’s a tangy Gardenia Provolone Cheese® that’s incorporated into a recipe or the perfect Stella Romano Cheese®  finish to a meal, cheese can play a starring role in the dishes you serve. Shareable starters such as a Ciabatta Fonduta appetizer or Charcuterie & Fromagerie Global Selection pair beautifully with heartier fare, including this Country Tuscan Pizza or Goat Cheese-Filled Rosemary Chicken in Prosciutto entrée.

On Valentine’s Day, customers are looking for a unique (and delicious) dining experience. Lush, cheese-packed dishes, romance-themed menu items and other special elements can serve as an incentive for diners to show a little love—and either make a reservation or order from your restaurant on Feb. 14.

Discover innovative ingredients and recipes that can provide additional menu inspiration for Valentine’s Day—and other upcoming holidays—with Your Business, Saputo’s new monthly e-newsletter. Sign up here to start receiving it in your inbox.